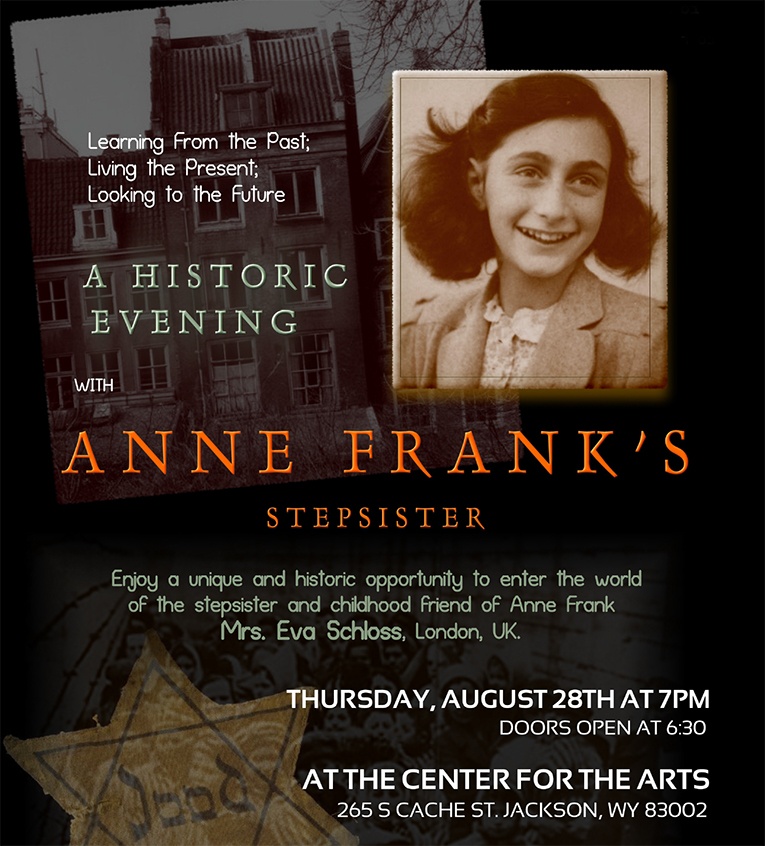 Historic Evening with Anne Frank’s Stepsister: Eva Schloss, Learning From the Past; Living the Present; Looking to the Future

On Thursday, August 28, 2014, the Chabad Jewish Center of Wyoming will host what is sure to be an inspiring evening with Mrs. Eva Schloss as she tells her fascinating story. Mrs. Schloss is the step sister and childhood friend of Anne Frank. She is an enthusiastic advocate for helping society understand the meaning of an existance without prejudice or bigotry towards any human being. Governor Matt Mead is proclaiming August 28, 2014 Wyoming Tolerance Day. The lecture will be held at the Center For The Arts, located at 265 S. Cache Street, in Jackson and will begin at 7:00 p.m. A personal book signing will follow the lecture.

I was born in Vienna,Austria 1929. As one of many Jewish families, we were faced with persecution, but were lucky enough to be able to flee the country, first to Belgium and then in 1940 to Amsterdam, Holland, where we met the Frank family.

Following the German invasion of Holland in 1942 and the arrests of many Jews, our family had to go into hiding. In May 1944 we were betrayed, captured by the Nazis and sent to the death camp Auschwitz. In January 1945 my mother and I were liberated by the Russian army. We were evacuated eastward, travelling with the Russian army as far as Odessa. We had to wait until the war ended in May 1945 to be repatriated to Amsterdam. There we learnt of the tragic deaths of my father and 17 year old brother in Mauthausen. The loss of my family haunted me and made it difficult to lead a normal life again.

I had to resume my education and finished school at 18, and went on to study History of Art for a year at the University of Amsterdam.In 1951 I began training as a professional photographer in London, where I met Zvi Schloss. We were married a year later and made our home in London, during which time I was working in a commercial studio. In 1953 my mother married Otto Frank the widowed father of the diarist Anne Frank, making me her posthumous step sister.

Zvi and I had our first daughter in 1956, and we were blessed with two more over the years. From 1972-1997 I owned and ran an antiques business, in that time the girls had grown up and had children of their own, making us the proud grandparents of three girls and two boys.

Since 1986 I have become increasingly active in Holocaust education by speaking in schools, universities, prisons and public meetings. I co-founded the Anne Frank Educational Trust in the UK.

My first book, Eva’s Story, about my experiences during the war, was published in 1988. It has been translated into eight languages.

In 1995 I co-operated with U.S. playwright James Still in the creation of an educational play And Then They Came for Me, Remembering the World of Anne Frank, dealing with four teenagers in the Holocaust. The play is widely performed in England, U.S.A, Europe and Australia. I am attending many of those performances so I can answer questions after the shows. In connection with these educational activities, I received an Honorary Doctorate in Civil Law from the University of Northumbria in 2001, and from the University of York in 2004 for Education.

In 2005 I wrote my second book, The Promise, aimed at younger readers, telling the story of my brother Heinz.

In 2008 the U. S. House of Representatives honoured me in the Congressional Record.

In 2012 I was awarded an MBE by Prince Charles for Holocaust Education.

In 2013 I published my third book, After Auschwitz, describing the impact of my experiences on my life and that of those around me.