MOOSE, WY — On Wednesday afternoon, August 19, Grand Teton National Park biologists captured a female black bear and her cub that on numerous occasions acquired human food items left unattended by visitors to the String, Leigh, and Jenny Lake areas.  Due to a long history of nuisance behavior, this bear and her cub were removed from the park and relocated to the Great Plains Zoo in Sioux Falls, South Dakota, on Saturday, August 22. The decision to remove the bears from the park was made out of concern for public safety.

On Friday afternoon, August 14, park rangers hazed the adult black bear away from the String Lake picnic area. The two bears then ventured into the Teton backcountry where, later that weekend, the mother black bear was photographed tearing into a backpack and stomping on a tent at a backcountry campsite in her search for food.

Once captured, the female was identified as one that has gotten into coolers, backpacks, picnics, trash bags, and tote bags in search of human food on 17 occasions between 2012 and 2014. This behavior indicated the bear had become conditioned to associate humans with food. She was teaching her young cub that same undesirable behavior. Park managers welcomed the opportunity to relocate both of these bears to the same zoo as the alternative would have likely included separation of the cub from its mother and euthanization of the adult.

It is worth noting that failure by park visitors—including local residents—to properly secure food items and other scented items led to this action to remove the bears from their native habitat. This female bear has repeatedly gotten into backpacks and coolers left unattended by people who were swimming and picnicking in the String Lake and Leigh Lake areas.

In the past three years, park staff have seen numerous food storage violations by visitors using the String Lake beaches and picnic areas. People have left unsecured food items unattended while they enjoy wading, swimming, and boating on String Lake, and there have been many reports of black bears receiving human food. Because of this pattern of careless food storage, park officials are considering management actions including a prohibition against food items in this area.

Although cliché, it is too often true that a fed bear is a dead bear. A human food-conditioned female black bear was euthanized in mid-June out of concern for public safety after it climbed into the trunk of a vehicle and attempted to enter cabins at Jenny Lake Lodge. Fortunately, this newly captured black bear and her cub will not suffer that same fate. However, placement of wild bears in zoos is not always a viable option, and park visitors must realize that careless actions can lead to the death of bears that have been corrupted by human food. Once a bear acquires human food, it loses its fear of people and may become dangerous. Human carelessness doesn’t just endanger people; it can also result in a bear’s death.

Park officials strongly remind local residents and visitors that proper storage of food items and disposal of garbage is vitally important. With simple actions, people can help keep a bear from becoming human food-conditioned and possibly save its life. Detailed information about how to behave in bear country is available at park visitor centers and online at www.nps.gov/grte.

Though the Snake River in Grand Teton National Park does not consist of any whitewater, it is a complex and unpredictable braided river. A strong current, shifting channels, numerous logjams, eddies, and snags all combine to make floating the Snake a challenging proposition.  These obstacles often require floaters to set up maneuvers well in advance, and inexperienced pilots often make maneuvers too late.

Rangers have assigned difficulty levels to the various stretches of river in the park. The section from Deadman’s Bar to Moose Landing, where all of the recent incidents have occurred, is rated “advanced.” In all five incidents, the parties involved likely did not possess appropriate skill and experience to be floating an advanced section of river. Good alternative river segments include Pacific Creek Landing to Deadman’s Bar (rated “intermediate”) and Jackson Lake Dam to Pacific Creek Landing (rated “beginner”).

The five incidents fortunately did not result in significant injuries to those involved. However, the incidents did result in several minor injuries, damaged equipment, and in one case a destroyed vessel. The five parties were respectively operating a canoe, a kayak, a raft, and two drift boats. Some of the visitors involved were local residents. In some cases, the parties were able to self-rescue and were floated to safety by rangers. In others, rangers rescued the visitors hung-up on obstructions using swift water rescue techniques. Grand Teton Lodge Company and Triangle X river guides assisted with two of the rescues.

Rangers urge all visitors planning to float the Snake River to select their river segment based on an accurate assessment of their group’s ability level. River information can be obtained at all park visitor centers. Both a park boat permit and a State of Wyoming Aquatic Invasive Species (AIS) decal are required before launching on any park waters. Additionally, all watercraft entering the park are subject to an AIS inspection when checkpoints are operating. 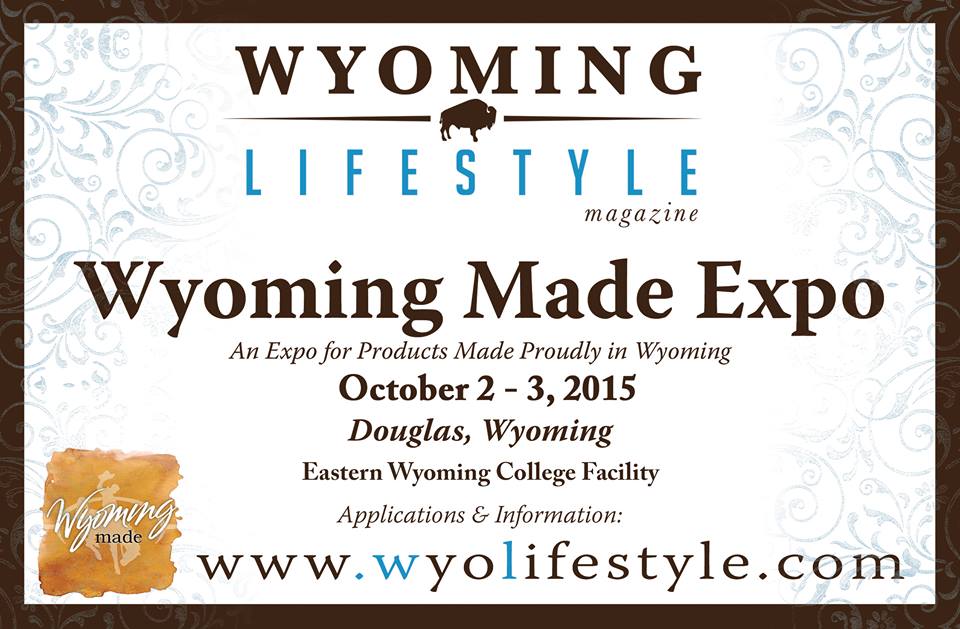 Rock Springs, WY –  The Rock Springs Main Street/Urban Renewal Agency is pleased to announce the Art Underground Gallery, an exciting new project designed to bring life, color and art to the pedestrian underpass in Downtown Rock Springs.  The gallery is also meant encourage the community to get involved in adding color and creativity to our public spaces. Residents of all ages are invited to create an individual mural that will be displayed in the underpass, semi-permanently.

A limited number of primed canvases (2’ by 4’ plywood) are available for the community to pick up, free of charge.  They can be picked up from the Rock Springs Main Street/URA office at 603 S Main Street in Downtown Rock Springs.   Completed canvases should be returned to the Rock Springs Main Street/URA office by September 1, 2015.  Because there are a limited number of canvases, they are available on a first come, first served basis.  Once all canvases have been given out, we can no longer accept entries.

The installation will be unveiled at a ribbon cutting and public reception on September 16. Submissions will be photographed and posted on the Downtown Rock Springs Facebook page.  For entry forms and more details, visit DowntownRS.com, or call 307-352-1434. Special thanks to Superior Lumber & Bloedorn Lumber for the supplies.

Downtown Rock Springs has a few Blues & Brews glasses left for purchase at the office! Two glasses for $10 via their office at 603 S. Main! 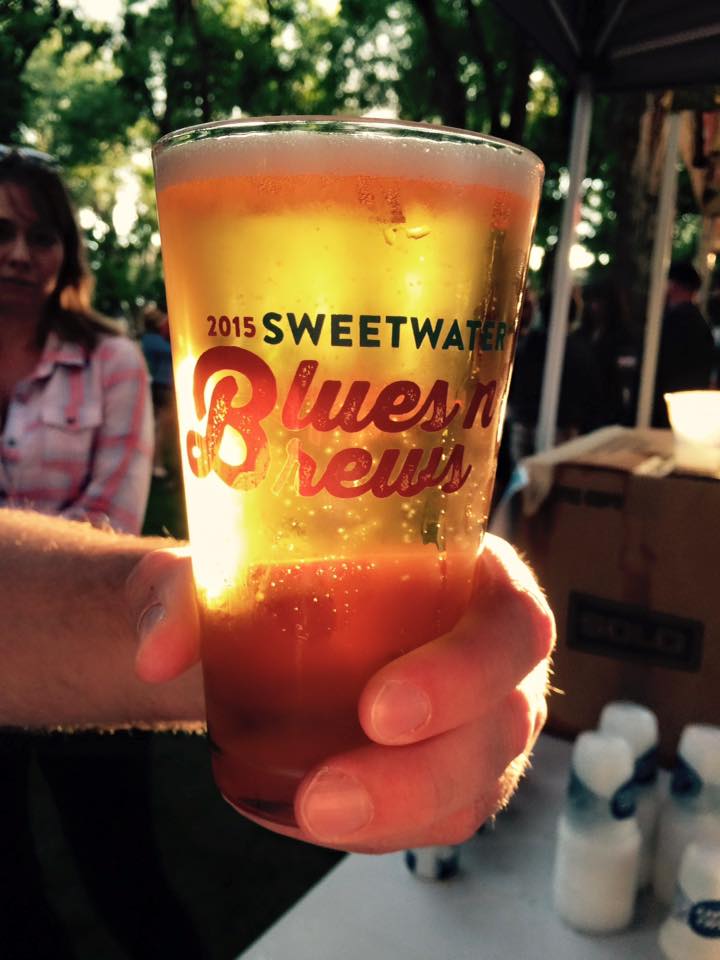 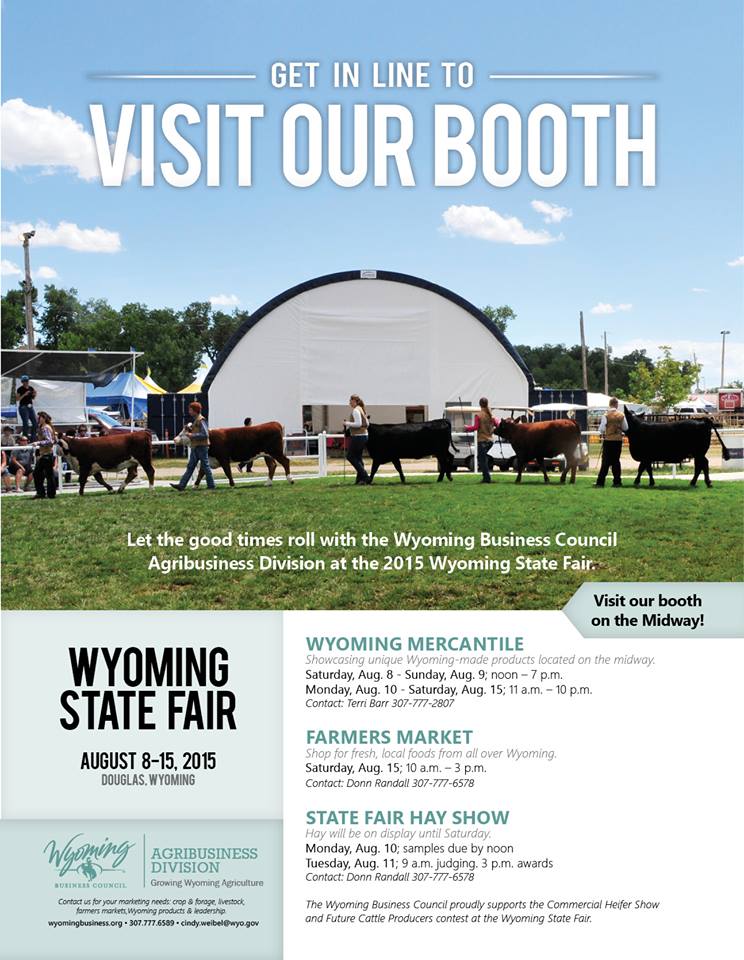 We were excited to profile Lazy KT Designs and owner Kaitlyn’s friend The Rusty Bucket (also of Gillette) in our Sprinter 2015 issue of WLM. These two ladies excel in producing fun & unique products right here in Wyoming! Lazy KT Designs just released a really cool series of antique ceiling tile artwork, and we asked for a chance to share it with our readers … See below for Lazy KT Designs’ contact info, and be sure to visit the Wyoming

First Program’s cabin at the Wyoming State Fair through August 15 for a chance to check out LOTS of Wyoming-made products! (And October 2&3, Wyoming stores can visit our Wyoming Made Expo to see products they can carry in their stores, too!) 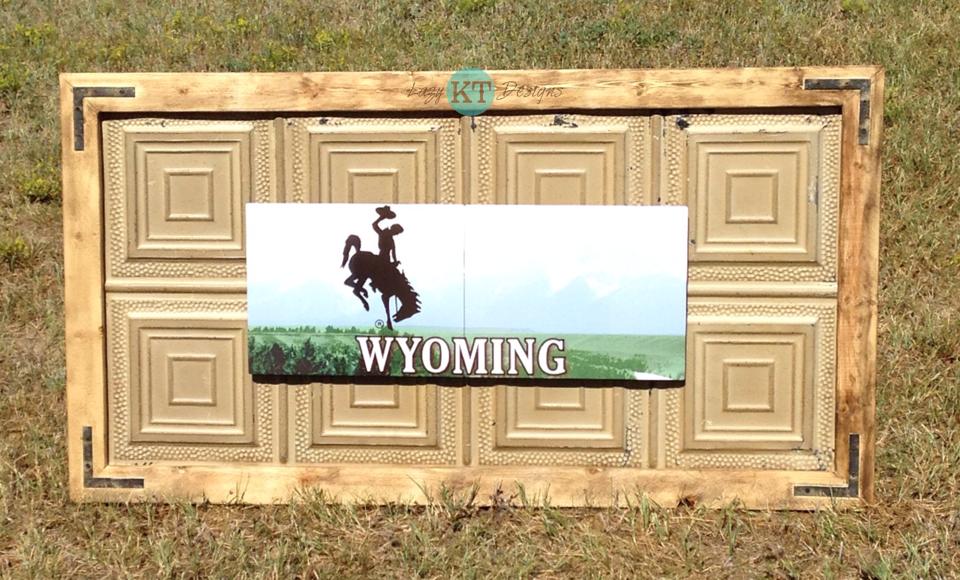 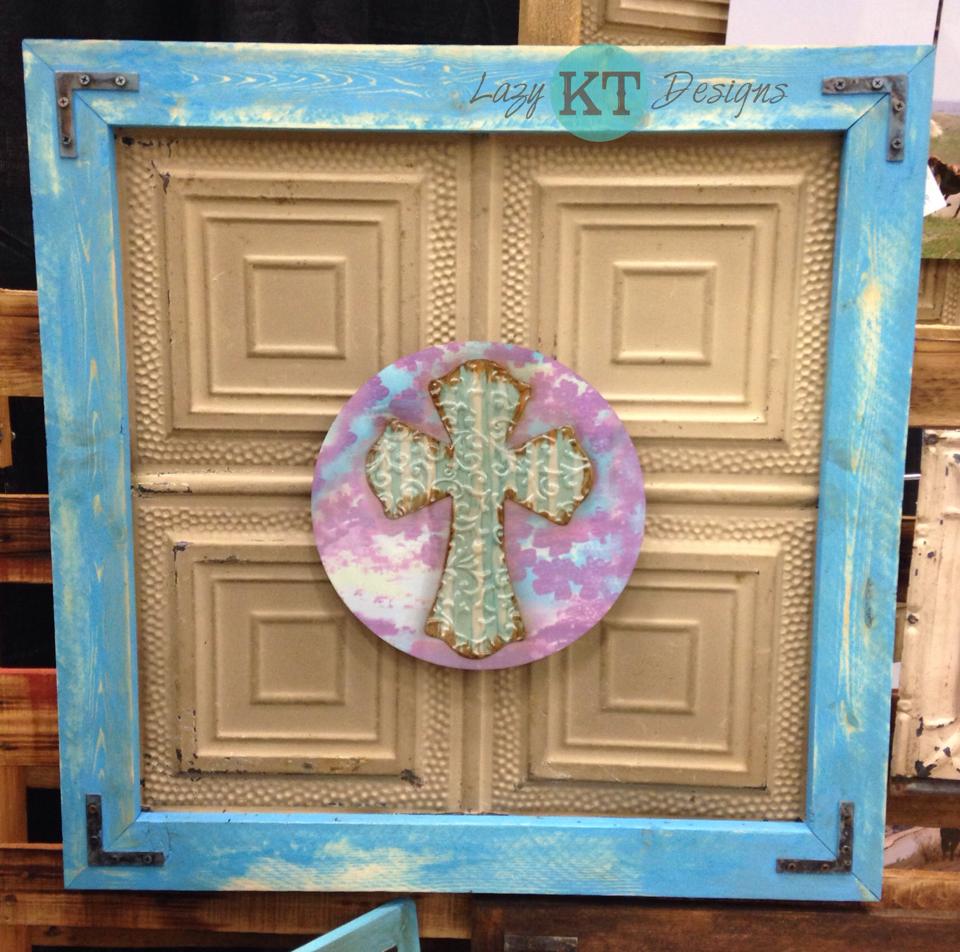 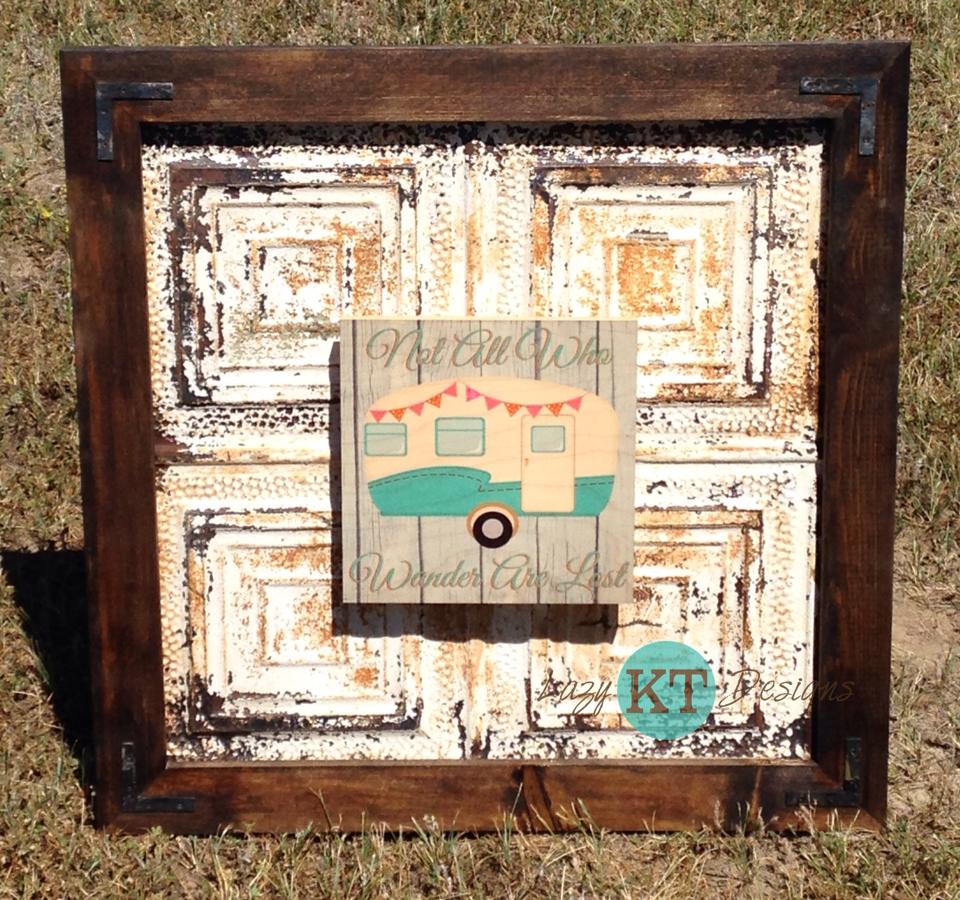 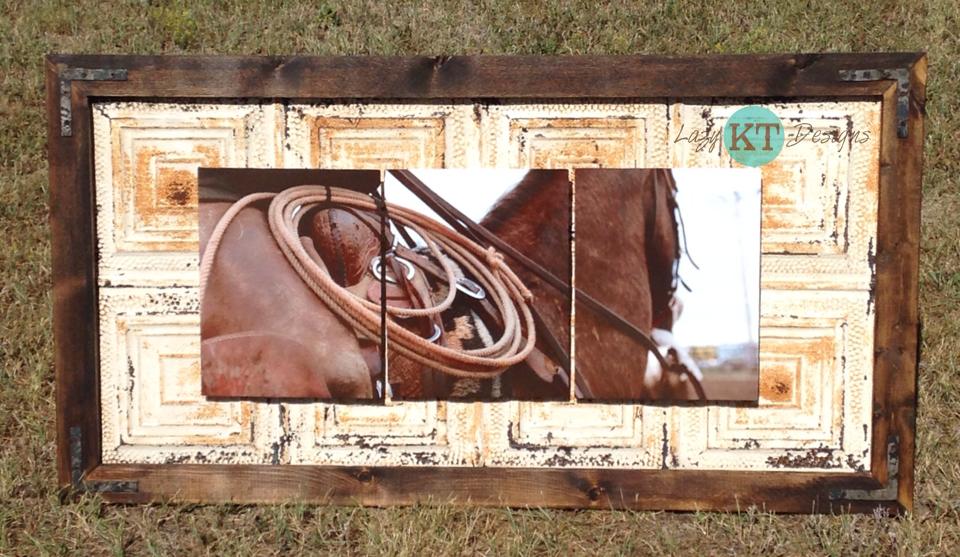 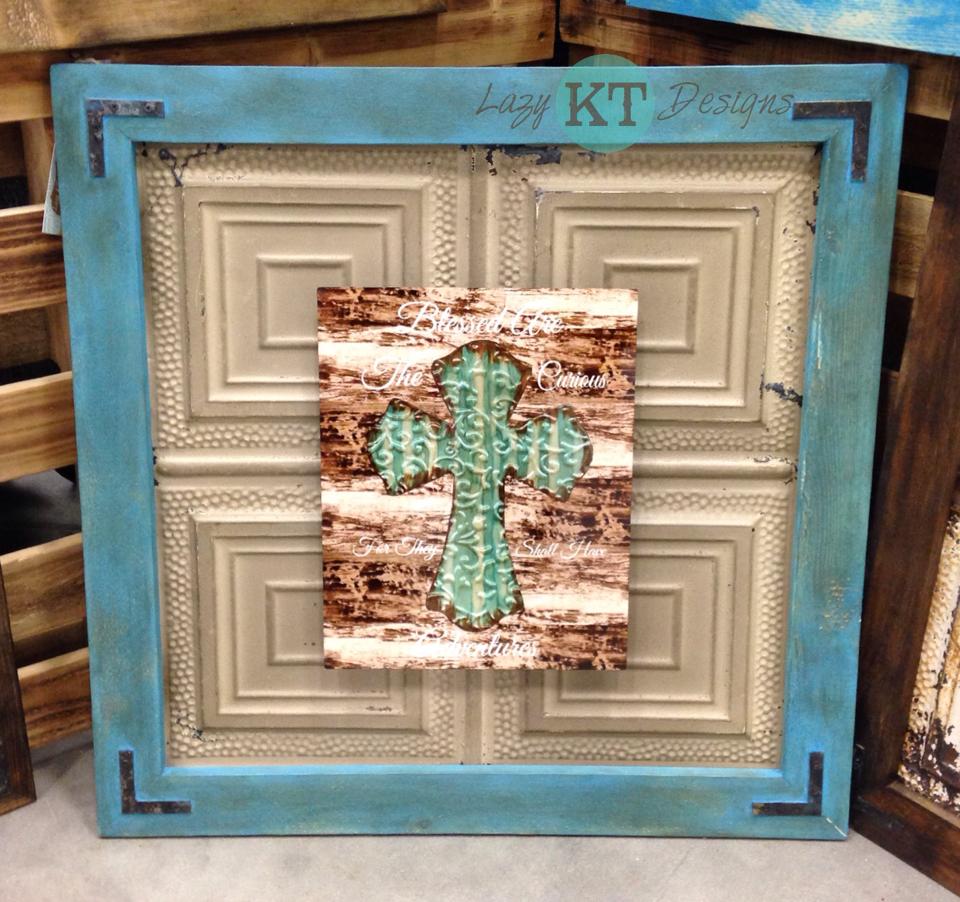 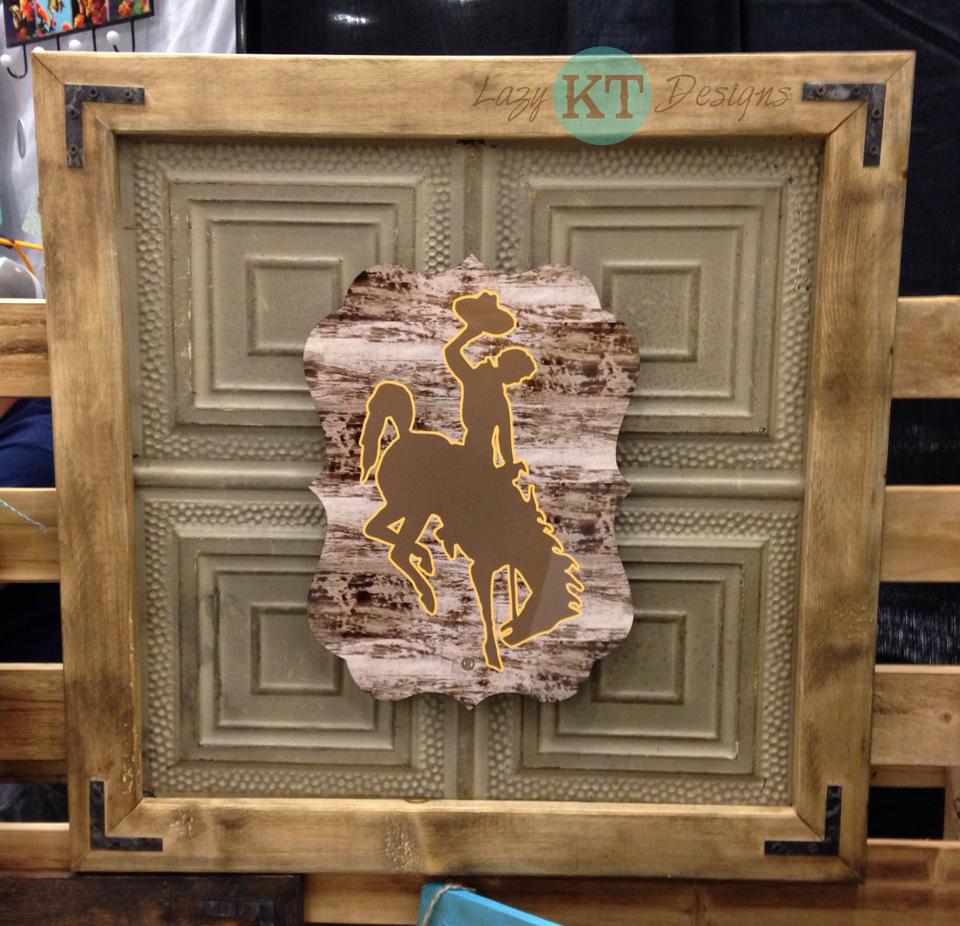